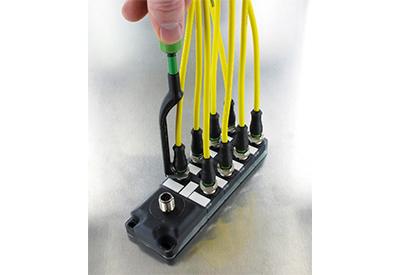 If you were around in 1980’s you will probably remember walkmans, vcrs, mix tapes and big hair bands on MTV, amongst other things. The decade started with the release of PacMan, the Rubiks Cube and a Hollywood actor called Ronald Reagan winning the US Presidential election. It ended with the first episode of the Simpsons, Timothy Berners-Lee inventing the World Wide Web and the Berlin Wall coming down to symbolize the end of the Cold War.

Some notable 1980’s inventions included the first artificial heart, CD players, the Apple MacIntosh computer, Microsoft Windows, the Nintendo Gameboy and the first GPS satellite to be launched into space.

But there was one more invention of the 1980s that wasn’t really noticed by the general public, but ultimately paved the way for fast, easy and reliable electrical connections that we often take for granted in control systems today. We are talking about the M12 circular connector that was launched at the Hannover Fair in 1985 and has since become one of the most popular industrial connectors in the world.

These days, you will be hard-pressed to walk into any manufacturing plant without seeing an M12 connector. They are used to connect sensors to I/O modules, vision systems to Ethernet switches, light curtains to safety controllers and much more. Originally only available in 3-pole and 4-pole versions with an A-Coded keyway for power and I/O signals, the M12 connector is still evolving and has become one of the most versatile circular connectors available. 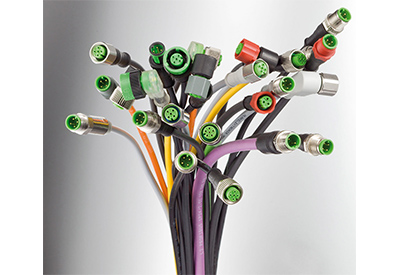 Now, more than 35 years since it was launched, there are many different types of M12 connectors for signal, data and power connections. With M12 connectors now capable of carrying up to 16A of power and transmitting data at speeds up to 10 Gbit/s, that quick connect M12 connector invented in 1985 has truly become one of the most versatile industrial connectors of the world!

In addition to being relatively small and providing an IP67 protection rating (when tightened correctly), one of main the reasons that the M12 connector has been so successful comes down to the coded keyways that help prevent accidental cross connecting of different signal types. Some M12 connectors are designed specifically for data and some are designed for power, so you really do not want to get them mixed up. The coded keyways are extremely effective at preventing this from happening.

There are currently more than a dozen types of M12 connector coding that are identified with an alphabetic letter ranging from A to Y (there is no Z yet).  With so many different options available, it can be a little confusing to choose the right type of M12 cable / connector for your application. Here at Murrelektronik we often get asked which coding works for a specific type of connection, so in this month’s edition of Connectivity Corner I thought it would be a good idea to decode some of the main types of M12 connector that are currently available.

To keep things simple, I will focus on the male side of the connectors and use “poles” to describe the electrical contacts, but rest assured the female versions of the connectors have contacts with the same ratings as the male connectors. We’ll cover the ten most popular M12 connectors in alphabetical order first, then summarize these by application at the end. Let’s get started with the letter “A”. 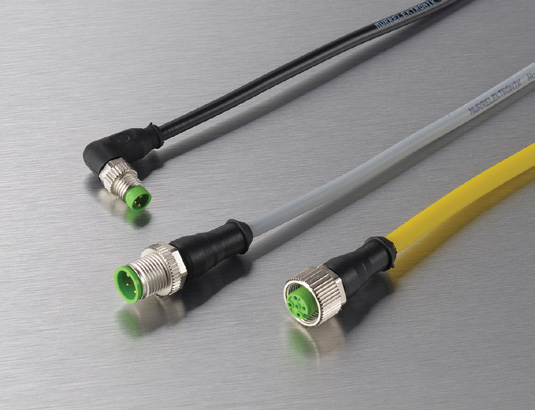 B-Coded connectors with 2, 4 or 5 poles are more commonly found in Europe because they are mainly used on Profibus and Interbus fieldbus systems. Although B-Coded connectors are not very common here in North America, you can still run into them from time-to-time if you end up working on older Siemens PLCs or other control systems that were originally designed in Europe.

C-Coded connectors are another less common M12 connector type. These 3 to 6 pole connectors are usually found on 120VAC powered sensors and actuators so you will likely only find them on older machines with AC control systems. The connector incorporates a dual keyway which prevents them from being accidentally connected to an M12 A-Coded connector.

D-Coded connectors are currently one of the most common M12 connectors used for connecting field devices to industrial networks. You will find these 4-pole M12 connectors standard on Ethernet, ProfiNet and EtherCat field devices and industrial CAT5e cables that have a maximum data transfer rate of up to 100 Mbit/s. If you are looking for Gigabit data transfer rates and CAT6 rated cables you will need an X-Coded connector (see below). 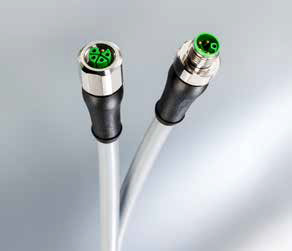 S-Coded connectors have very similar specifications to K-coded M12 connectors but are only available with 3-pole (2+PE) or 4-pole (3+PE) versions. With a rated voltage up to 630VAC and a maximum current of 12A per pole, they are a good choice for AC power connections.

T-Coded connectors are another M12 connector designed for DC power connections. This 4-pole connector is rated up to 63VDC/AC, with each pole rated to 12A. The lower current rating and the lack of a PE option are key differences between this and the L-coded connector.

X-Coded connectors were designed to meet the high-speed demands of modern industrial networks. Capable of data transmission rates of up to 10 Gbit/s they are easy to identify due to the galvanic separation plates that isolate the wire pairs forming an X. This 8-pole M12 connector is quickly becoming the standard connector for high-speed industrial network connections that require IP67 protection.

Y-Coded connectors are another relatively new type of connector designed to provide a hybrid solution for connecting power and data using a single cable. The connector consists of 8 poles split into two groups of 4 that are galvanically separated with a metal coding that looks like a Y. The metal coding plates also provide an effective separation between power and data. The connector’s data poles are rated at 0.5A and can transmit data up to 100Mbit/s. The power poles rated to 6A at 30 VDC.

That’s a lot of M12 codings to digest! Let’s try to make it a little easier by categorizing them by application and the four most common M12 connectors we work with every day at Murrelektronik. 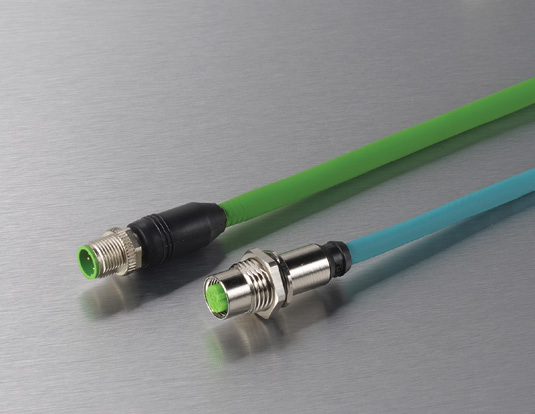 A-Coded connectors with 3 to 5 poles are definitely the most common type of M12 connector. They are mostly used to provide power (4A max) and signal connections for sensors, pneumatic or hydraulic valves, IO-Link devices and many other 24VDC devices.

D-Coded connectors with 4 poles are often used to connect field devices like I/O modules, VFDs and valve manifolds to an Ethernet, Profinet or Ethercat network up to 100 Mbit/s.

Well, we rarely work on Profibus or Interbus applications anymore, so B-Coded connectors are not something we run into often here in Canada and it’s been more 10 years since I’ve worked on an AC application requiring a C-Coded connector so that leaves the K, S, T and Y coded connectors. These four connectors are still relatively new and have not yet been widely integrated into many industrial devices yet, so as of spring 2021, we are not seeing any real demand for these types of connectors. That’s not to say you will not come across devices using them, or their popularity will not increase in the near future but it’s just good to know about them.

With its proven reliability, compact size, IP67 (and IP69K) protection, multiple contact options, and a current rating of up to 16A, the M12 connector is probably the most versatile industrial connector in the world, and I suspect it will remain that way for many more years.

Until next month, have fun decoding all those M12 connectors out there and if you need help choosing the right connector for your device or application, don’t hesitate to reach out to us here at Murrelektronik Canada. 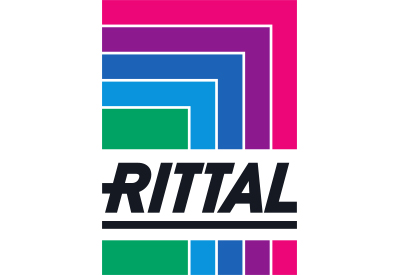 Digitalization is transforming the entire healthcare sector, with e-health set to play a more important role in healthcare provision. Examples include services such as video consultations, incorporating data from wearable devices in diagnostics and patient care, and using digital solutions in surgeries, hospitals and laboratories. Rittal is helping the healthcare sector with this revolution.

More often than not, there’s an ideal tool for the job. For example, you wouldn’t try cooking a steak in the microwave, as that particular tool is not engineered for properly preparing that kind of food. You’d of course cook a steak on the grill, as that type of heating application is best designed to heat the steak to your exacting specifications. In today’s industrial enclosure marketplace, there are numerous options for enclosure material, and each has its own specifications, ideal applications, liabilities, and value propositions. 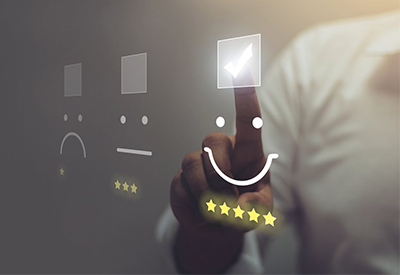 The open market is a beautiful thing for both buyers and sellers. It allows craftsmen to leverage their particular expertise to start a business, and potential customers the freedom to choose which business they think is worth their patronage. The reasons for choosing a vendor can vary. Sometimes customers base it on how clever the advertising is or whether or not they like the proprietor. And there’s nothing wrong with choosing based on either of those.

Artificial intelligence (AI)/machine learning (ML) are disrupting industrial manufacturing. In this article, we will focus on key trends that help leaders navigate their digital transformation (DX) initiatives with clear foresight. Ten years ago, model creation was the realm of data scientists, but that space has now been disrupted due to availability of easy-to-use tools that empower even the non-data scientist to leverage ML libraries and build models.

It’s that moment you dread: You’re doing controls testing on a new machine as a customer’s start-up date approaches, when you discover a problem. The issue could be almost anything. It could be a functionality problem, like an unexpected stoppage or a missing sensor. Or it could be a last-minute customer concern, like the HMI’s sequence or layout. 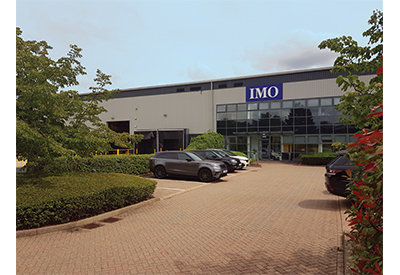 Earlier this month Panel Builder US had the opportunity to chat with IMO Automation to learn a little more about their operations in the US and how they are working to provide unique solutions and support to the panel building market in the US. IMO was founded in 1972 in the UK and has been steadily expanding their global footprint ever since with 50% of their business now coming from the global market.